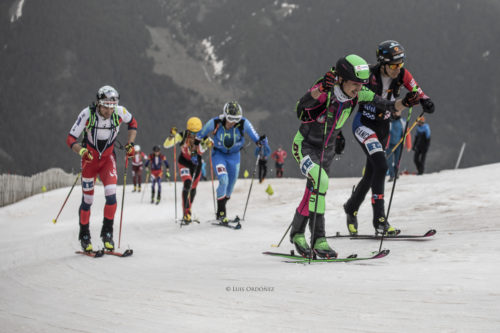 Lausanne/Mondovì, 3 March 2021 – The second day of the ski mountaineering World Championships in Andorra has been in the name of the Relay race, a spectacular competition that involved all categories. The race track included the classic Sprint race course with the addition of a second ascent and a second descent.

The first category to start has been the youngest one, composed of a girl, a U18 and a U20 athletes.

In this first race, the Swiss team (Caroline Ulrich, Tobias Donnet and Jon Kistler) has dominated. At the beginning the Italian Samantha Bertolina set the pace for the race, then in the second and third parts the Swiss gained the first position and never left it until she got the gold medal. The Italian team (Samantha Bertolina, Tommaso Colombini and Luca Tomasoni) has confirmed the second position, while the Spanish’s one (Maria Ordonez Cobacho, Hugo Fenoll Fernandez and Albert Perez Angles) has got the third step of the podium.

The second category to take the field was the Senior Women’s one. The national teams, also in this case, were composed of three racers.

In the first section, the Swiss Marianne Fatton took the lead, also maintained by her following teammate Alessandra Schmid. Spain was in second position, while Italy in third with Alba De Silvestro, and France in the fourth one. The Italian athlete focused on the Swiss opponent and meter after meter arrived on her heels. The overtaking took place at the very last transition before the last descent. Alba De Silvestro, in the first position, gave way to the last racer of her heat, Mara Martini, with the task of keeping Italy on the top of the world. The Swiss Victoria Kreuzer, immediately after the Italian rival, forced the pace to take the command, but at the end she has been overtook by the French Axelle-Gachet Mollaret. Mara Martini knew that Axelle Gachet-Mollaret was on her heels, since she struggled a lot to reach the second position and was trying everything possible to get the gold. The Italian did not lose the concentration and just in view of the last transition she increased the pace obtaining a few more seconds compared to the French. For the alpine ski instructor Mara Martini the descent is only a proforma and almost at the finish line she raised her hands to the sky looking at her teammates who, victorious, was waiting for her.

After the assignment of the medals to the youths and the Senior Women, it was the turn of the Senior Men to get on track.

The competitive battle, immediately after the start, was a above all between Switzerland, with Iwan Arnold, and Italy, with Nicolò Canclini, who immediately imposed a frenzied pace on the Swiss athlete and Xavier Gachet (FRA). On the second lap, Nicolò Canclini has been replaced by the teammate Michele Boscacci only a few seconds ahead of Arno Lietha (SUI). In third position there was the French Alexis Sévennec. On the penultimate lap Italy’s advantage was considerable and Michele Boscacci passed the baton to Robert Antonioli, followed by Werner Marti (SUI) and Thibault Anselmet (FRA). The last lap opened with the launch of the Italian Nadir Maguet, who was already seeing the gold medal ever closer. The positions for the second and third positions did not change, with before the Swiss Martin Anthamatten and then the French William Bon Mardion. The podium of the Senior Men Relay race has officially been confirmed with Italy (1° place), Switzerland (2° place) and France (3° place).

As for the programme, tomorrow there will be the Vertical race, which will be held along the traditional Arinsal track that from the start of the Josep Sierra chairlift will go up to the Xalet Igloo at an altitude of 2300m. The height difference for the Senior category will be 720 metres while the youth categories will have to face 420 metres.