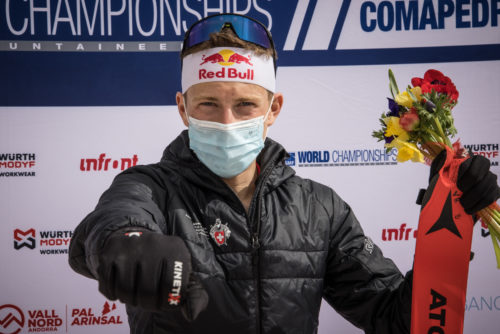 Lausanne/Mondovì, 4 March 2021 – On the third day of competition at the 2021 ISMF World Championships in Andorra and precisely on the snows of Arinsal – Vallnord the world medals for the Vertical race have been awarded. The international ski mountaineering athletes, coordinated by the ISMF, have competed on the traditional track that has been assigning the precious ISMF World Cup ranking points for almost a decade.

The start was in Arinsal, just above the station of the Josep Sierra chairlift that goes up to the Comallemple refuge, reaching at the end the Xalet Igloo at an altitude of 2300 metres. The only difference was that for the youngest categories the start has been higher.

The height difference of the ascent for the Senior was of 720 metres while for the youths of 420 metres.

Among Senior Men, the experts in the Sprint discipline, the Swiss Rémi Bonnet and Werner Marti and the German Anton Palzer, have proved their abilities and honoured in the right way their medals. In the first part of the ascent, in the hairpin turns towards Comallemple, Anton Palzer (GER) has forced the pace to maintain the first position, followed by the Swiss Rémi Bonnet who was not surprised and waited for the right moment to overtake the leader. In the last part of the race Rémi Bonnet, winner of the ISMF World Cup held in January in Verbier (SUI), has controlled the advantage over the German opponent and in view of the final straight section has raised his arms to the sky stopping the clock at 25’55”. Therefore, the second position was for the unchained Anton Palzer, who wanted to gamble everything in view of his next retirement from the ski mountaineering world in favour of a sports career in cycling. The third place has been decided in the last three metres of the race. The Italian Davide Magnini, in fourth position for almost the entire race, in the final straight part has decided to come up beside and overtake the Swiss Werner Marti, but a small indecision, however, was fatal to him just a couple of metres from the blue finish line. In fact, Werner Marti has speeded up and achieved the third step of the podium with a time of 26’46”. Consequently, Davide Magnini has arrived fourth while the Belgian Maximilien Drion Du Chapois fifth.

Among U23s, the Italian Sebastien Guichardaz is the winner, while the Swiss Aurélien Gay and the French Julien Bernaz achieved the second and third place respectively.

As regards the Senior Women, there was a competitive fight between the French Axelle Gachet-Mollaret and the Swiss (expert in the Vertical race) Victoria Kreuzer. At the halfway point Axelle Gachet-Mollaret has passed first, followed by the Swedish Tove Alexandersson and a little behind by the Swiss one. The Italian Giulia Murada was after them in fourth position. At the end the very strong French athlete has stopped the clock in 30’38” and put the gold medal around her neck. The world podium has been completed by Victoria Kreuzer (2° place) and Tove Alexandersson (3° place). Giulia Murada, winner in the U23 category, has crossed the finish line fourth in the Senior one, followed by her teammate Giulia Compagnoni (5° position). The silver and bronze medals for the U23 category went to Giorgia Felicetti (ITA) and Laia Sebastià Bellobi (AND).

Among U20s, the Italian Samantha Bertolina and the Austrian Paul Verbnjak are the new World Champions of the Vertical race.

As for the youngest category (U18), the winners are Antonia Niedermaier (GER) and Nils Oberauer (AUT).

The ISMF World Championships in Andorra are about to come to the conclusion. Tomorrow the athletes will have a rest day to prepare for the last scheduled competition, the Individual race, considered as the “Queen” of the entire event, which will take place in the morning of Saturday 6 March 2021.

The competitors will enter the heart of the Comapedrosa territory with a very technical track. The Seniors will have a total height difference of 1900 metres divided in three ascents. The collaborators of the Race Director and mountain guide Carlo Ferrari have also planned two sections to be covered on foot with skis in the backpack. The show is guaranteed!