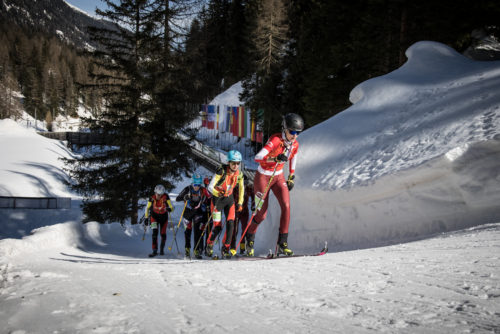 The Swiss Caroline Ulrich and Léo Besson dominated in the U20 category, while Arno Lietha also won among U23s together with Marie Pollet-Villard (FRA)

Lausanne/Mondovì, 20 February 2021 – The new weekend dedicated to the ISMF World Cup officially opened in the morning of Saturday 20 February 2021 at the Val Martello Biathlon Centre with the scheduled Sprint race.

The Local Organising Committee has set up a spectacular and very technical track that has engaged and entertained the international ski mountaineering athletes expert in the Sprint discipline. Initially, the insiders were afraid of the tightness of the snow, since the weather forecast of the last days had announced a intense rise in temperatures, but at the end it did not influenced the development of the race.

Just after the start, Arno Lietha took the command of the race and put behind his pursuers. In the part on foot Nicolò Canclini and Oriol Cardona Coll tried to overtake the Swiss opponent, but they failed.

At the end Arno Lietha crossed the finish line with a time of 3’11”, followed by Ernesto Canclini (2° place) and Oriol Cardona Coll (3° place). Furthermore, the Swiss racer also won in the U23 category, preceding Giovanni Rossi (ITA) and Florian Ulrich (SUI), who have got respectively the second and the third positions.

Among Senior Women, instead, from the very first laps, it was immediately clear that the athletes running for the final victory would have been the Swiss Marianne Fatton and the Swedish Tove Alexandersson. In fact the latter, after Flaine’s subdued performance, won today’s Sprint race with a time of 3’31”, while Marianne Fatton and Emily Harrop (FRA) obtained the second and the third position on the podium.

The French Marie Pollet-Villard got the gold medal in the U23 category, followed by the Italians Giulia Murada (2° place) and Giorgia Felicetti (3° place).

After the Sprint Race, on Sunday morning (21 February 2021) the skimo athletes will have to face the Individual race, whose start will be located nearby the former Hotel Paradiso at 2.088 metres.

Roberto Cavallo, ISMF General & Event Manager, affirms: “The Sprint race held today was very nice, with the first ascent and the final descent in the forest before arriving at the Biathlon Centre, where the start/finish area has been set up.

I can proudly state that the organisers here in Val Martello are very competent and technical and the collaboration with them has been working in a very brilliant way.

Fortunately, the weather is in our favour, with sunny days and a good condition of the snow.” 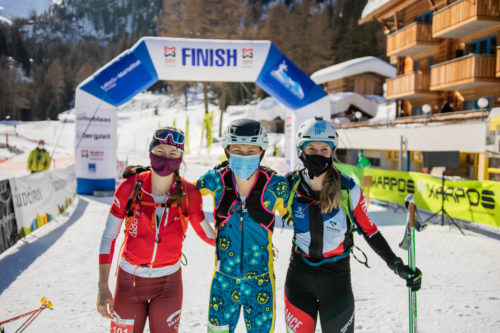