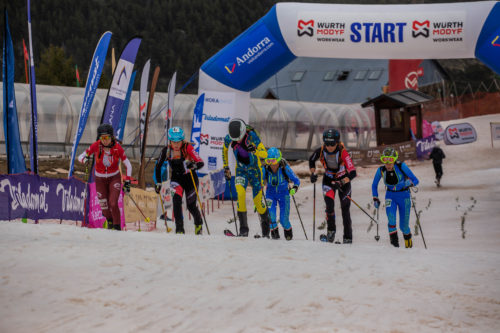 Arno Lietha (SUI) and Giulia Murada (ITA) got the gold among U23s, while Caroline Ulrich (SUI) and Noé Rogier (FRA) among U20s. Louise Trincaz (FRA) and Julian Tritscher (AUT) are the winners of the U18 category.

Lausanne/Mondovì, 2 March 2021 – After the official opening ceremony of yesterday evening, held in full compliance with the anti-Covid protocols, today (Tuesday 2 March 2021) the ISMF World Championships’ week in Andorra has begun with the fastest and therefore more intense competition: the Sprint race. The track has been the classic one with the traditional first phase, followed by the diamonds section, a part on foot and one with the skis on, before undertaking the last transition and moving towards the finish line. The strong morning of competition has started with the U18 and U20 categories and then culminated with the challenges of the Senior.

Among Women, the Swiss Marianne Fatton is the new World Champion ahead of the Slovak Marianna Jagercikova and the Italian Mara Martini, who have got respectively the second and the third position. The Swedish Tove Alexandersson, who for the first part of the race up to the start of the part on foot was leading the group, has arrived fourth, while the French Emily Harrop fifth.

Regarding the U23 category, Arno Lietha (SUI) and Giulia Murada (ITA) are the winners of today’s Sprint race, whereas Caroline Ulrich (SUI) and Noé Rogier (FRA) among U20s. Caroline Ulrich has been followed by the Italians Samantha Bertolina (2° place) and Lisa Moreschini (3° place) and Noé Rogier by the Swiss Robin Bussard (2° position) and Matteo Favre (3° position).

About the athletes of the U18 category, on their debut in the international competitions of the current season, Julian Tritscher (AUT) has arrived first, ahead of Jon Kistler (SUI) and Finn Hösch (GER). Among contemporary Women, Louise Trincaz (FRA) has dominated, followed by Ares Torra Gendrau (ESP) and Nicole Valli (ITA).

Once archived this first day of competition of the ISMF World Championships in Andorra, tomorrow it will be the turn to assign other important medals with the Relay race. The track will differ only partially from today’s one, with a second ascent and a second descent.