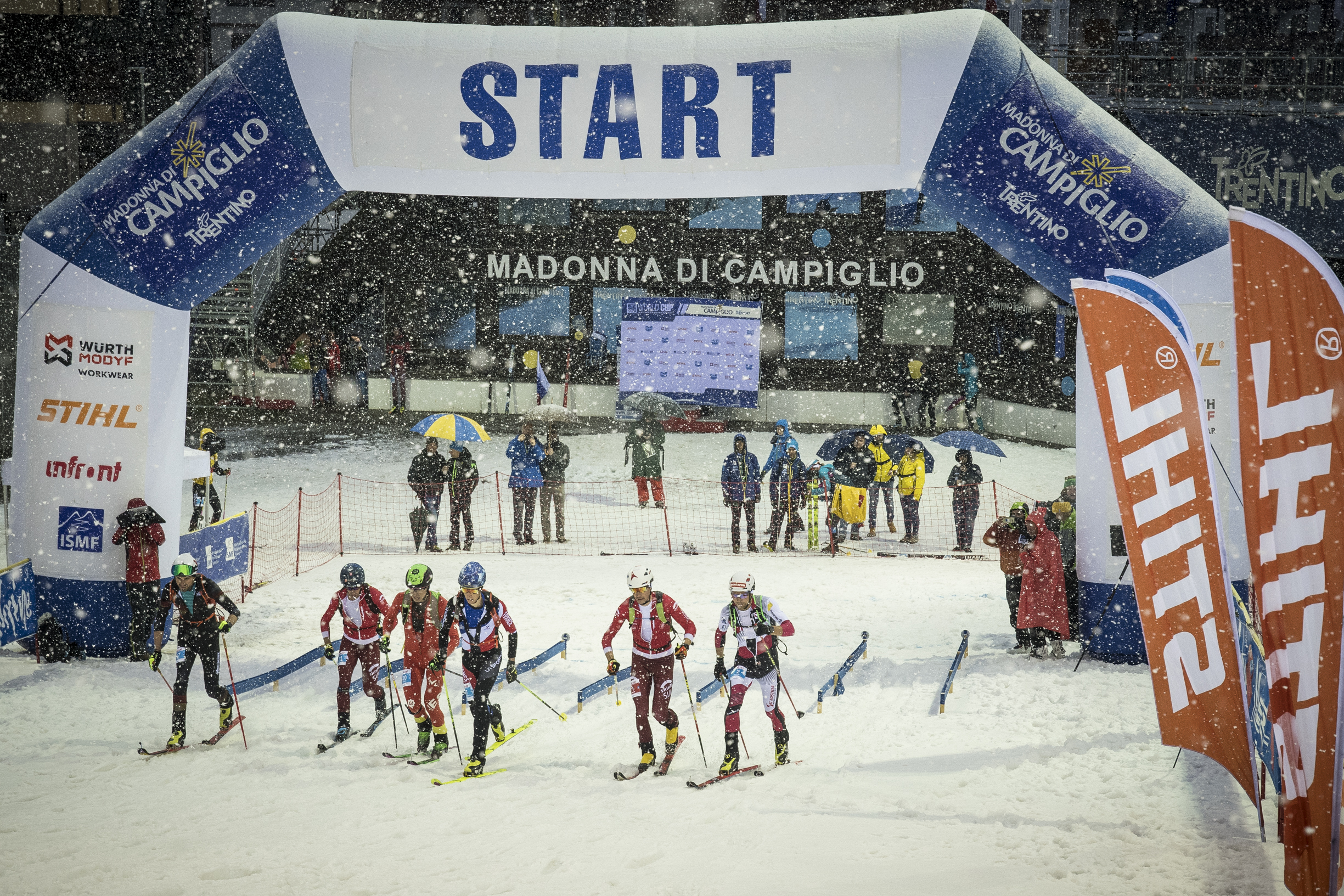 Lausanne, 4th April 2019 – The temple of the special slalom returned to the spotlight three months later for another World Cup event, but this time it is reserved for skis with skins.

The first act of the finals of the maximum ski mountaineering circuit was therefore staged in the late afternoon of yesterday on the Canalone Miramonti in Madonna di Campiglio, giving a particular suggestion for the location and for the snowfall that accompanied the exploits of the participants. Anyway the biggest emotion has been for the arrival at the photo-finish in the Senior Men race, dominated by the Italian Robert Antonioli who, however, on the descent was recovered and beaten at the finish line for a ski tip. The animated track included a first part with artificial inversions, then a steep uphill to face with the skis in the backpack and at the end the traditional final downhill with giant slalom doors and a parabolic trajectory. The Spanish Oriol Cardona Coll has been the winner on this track for only 7 cents on the athlete of Valfurva (Italy), while the third place has been for the Swiss Iwan Arnold. The champion of the last twelve months Michele Boscacci (ITA) had to settle on this occasion, by reaching only the fourth place, but it was a team play in favour of his teammate Robert Antonioli. Indeed he left behind himself the current leader of the overall ranking Anton Palzer (GER), who in turn was preceded by the French Thibault Anselmet (first among the Espoirs).

The two racers coming from Trentino (Italy) has been far from the podium (Federico Nicolini 13th and Davide Magnini 18th), decisively not very close to Sprint competitions.

The Specialty Cup for Sprint is won by the Swiss Iwan Arnold (240 points), followed by the Italian Robert Antonioli (225 points) and the Swiss Daniel Zugg (208 points).

Among Senior Women, there was the surprising success of the Slovak Marianna Jagercikova, thanks to a decisive competition, at the end of which she managed to precede the two Swiss athletes Marianne Fatton and Arina Riatsch. The first of the Italian team has been Mara Martini (7° place), who however reached the third position in the Espoir category. The fourth position went to Marta Garcia Farres (ESP), followed by the two French sisters Lena and Lorna Bonnel.

The Swiss Marianne Fatton won the Specialty Cup (280 points), while after her there were the Spaniards Claudia Galicia Cotrina and Marta Garcia Farres.

According to the regulations, the rankings of the Espoirs were obtained from the Seniors’ ranking, with the final victories of two athletes who went on the Seniors’ podium. Among Men, the French Thibault Anselmet graduated as Champion of the day, by arriving before the Swiss Arno Lietha and the Italian Nicolò Ernesto Canclini. Among Women, instead, the success has been for Arina Riatsch (SUI), followed by Lena Bonnel (FRA) and Mara Martini (ITA).

The Specialty Cups for Sprint went to the Swiss Arno Lietha and the French Lena Bonnel.

ROSSI AND OSICHKINA WON IN THE JUNIOR CATEGORY

Among Junior Men, the Italian team stood out with the victory of  the athlete from Lanzada Giovanni Rossi, who has preceded his compatriot Daniele Corazza from Valtellina with 9 seconds of difference. After them  there was the French Robin Galindo (3° place). Among Women, another umpteenth authority proof of the current World Cup leader Ekaterina Osichkina (RUS), who imposed herself easily, in front of her young opponent from Valfurva Samantha Bertolina, with 27 second of delay. The third step of the podium has been for the Swiss Emilie Farquet and the fourth for the Italian Valeria Pasquazzo.

At the end Ekaterina Osichkina also won the Specialty Cup for Sprint with 300 points, compared to the 26 points of Samantha Bertolina and the 180 points of Valeria Pasquazzo. Among Men, the Sprint World Cup ranking saw the triumph of the Swiss Patrick Perreten (240 points), chased by the Italian Giovanni Rossi (221 points) and the other Swiss Aurélien Gay (170 points).

This evening there will be the second act of the World Cup finals in Madonna di Campiglio with the Vertical race, with a variation on the track. The departure is scheduled at 6 pm from the bottom of the Spinale Diretta course, in the heart of Madonna di Campiglio (altitude 1520 meters), and the arrival will reach a total of 2103 metres, at the top of Spinale Mount (difference in height of 650 metres), with three different tracks based on the various categories.

The public will be able to follow the race at high altitude (in arrival area) using the cable car with free access from 5.45 pm to 7 pm. At the end of the evening there will be another appreciated novelty linked to this edition of the World Cup finals, the dinner event “SkiMo Party”, scheduled at 7.30 pm at the Fiat Chalet. All the athletes and officials will take part in this initiative, but even skimo fans can participate (reservations at raceoffice@3trecampiglio.it).