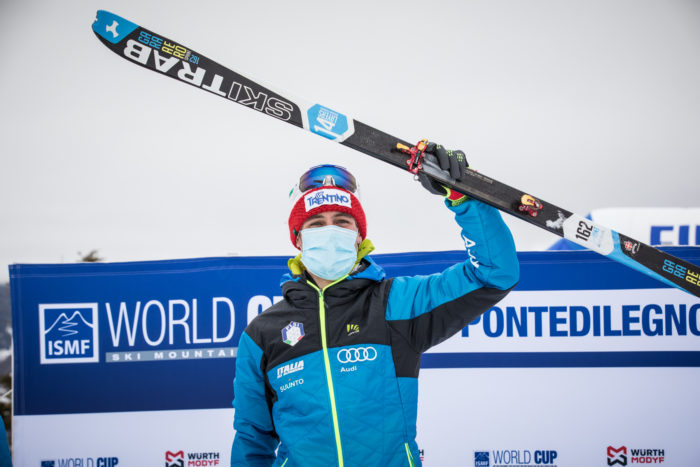 Lausanne/Mondovì, 20 December 2020 – The Men’s podium has been completely Italian with the 26-year-old from Trentino Federico Nicolini, who surprises everyone by crossing first the finish line in Corno d’Aola and achieving his first victory in the World Cup. He has preceded his teammates Robert Antonioli, holder of the 2019/20 Overall World Cup, and Davide Magnini. Among Women, the French Axelle Gachet Mollaret has won, while in the U23 category, extrapolated from the Senior one, two more “made in Italy” successes have arrived with Giulia Murada (1° place) and Giorgia Felicetti (2° place) and the male gold has gone to Andrea Prandi from Bormio (ITA). As regards the U20 category, there have been two unexpected victories thanks to the German Antonia Niedermeier and the Austrian Paul Verbnjak, whereas two other podiums with the Italian colours are referred to the silver medallist Samantha Bertolina from Valtellina and to the bronze one Lisa Moreschini.

There was great anticipation especially in the men’s field, to understand the state of the physical form of the competing athletes from 14 national federations, above all in this very demanding and particular season. And at the end of the 2509 m of the race track with a difference in altitude of 680 m, starting from Pontedilegno and arriving in Corno d’Aola, the triumph has been of the Italian Federico Nicolini. He has performed a tactical race in the first part and an unexpected attack in the final rush, remaining in the leading Italian group of four athletes up to 800 metres from the finish line, when he has decided to gamble everything and for the incredulous rivals there has been nothing more to do. It has been, therefore, a great victory for the this racer who stopped the clock with a time of 23’40”. The second place has been achieved by his teammate Robert Antonioli, who has counted a delay of 9 seconds, then thirdly Davide Magnini (ITA) with 14 seconds, who has tried to leave in the middle of the race, but was then sucked again into the group. Michele Boscacci (ITA), 26 seconds later, and the yesterday’s Sprint race winner, the French Thibault Anselmet have got respectively the fourth and the fifth positions, followed by the Italian Alex Oberbacher from the Alto Adige.

In the Women’s field, the French Axelle Gachet Mollaret has successfully managed the force and her rivals, finishing victorious with a time of 28’56″, preceding the Swedish Tove Alexandersson by 25 seconds and the Swiss Victoria Kreuzer by 44 seconds, not very satisfied with her performance. At the end, the fourth place has gone to the Italian Ilaria Veronese, arriving after 1’17” from the first.

As for the U23 categories, which have raced with the Seniors, Andrea Prandi has been closely followed by the Swiss Aurélien Gay, but has been able to precede him by 10 seconds and to be awarded of his first seasonal victory. The bronze medallist has been the Italian Sebastien Guichardaz.

The U23 Women ranking has awarded on the first step of the podium another time the Italian Giulia Murada of the Army Sports Centre, followed by her teammate Giorgia Felicetti, author of an excellent performance that has seen her just 10 seconds from the winner. The French Marie Pollet Villard has taken the third place.

The success of the German rookie Antonia Niedermaier (born 2003) in the U20 category on a track reduced to 433 metres of difference in altitude has been astonishing. She has precede Samantha Bertolina from Valtellina (ITA) by 39 seconds and afterwards the other Italian Lisa Moreschini. Among Men, on the same path of the tops, there has been an all-foreign podium with the Austrian Paul Verbnjak, 10 seconds ahead of the Spanish Albert Perez Angles (2° place) and the Swiss Robin Bussard (3° place).

Alessandro Mottinelli, in quality of Local Event Manager of the Adamello World Cup, affirms: “I am really satisfied of the results of the just concluded event. I think that the LOC’s experience in the organisation of ski mountaineering competitions contributed a lot to reach this success. We had a wonderful beginning for the 2020/21 season”.