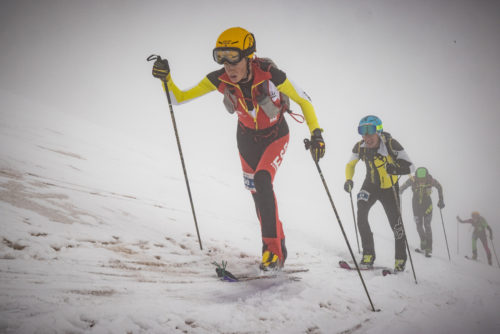 Paul Verbnjak (AUT) and Samantha Bertolina (ITA) are the winners in the U20 category, while Jérémy Muriset (SUI) and Antonia Niedermaier (GER) among U18s

Lausanne/Mondovì, 6 March 2021 – Today, the Italian athlete Matteo Eydallin and the very strong French competitor Axelle Gachet-Mollaret have won the most beautiful and prestigious medal: the got the gold one in the Individual race.

On the final day of the 2021 ISMF World Championships, on the Andorran snows of Arinsal in the natural park of Comapedrosa, the Italians Giulia Murada and Sebastien Guichardaz have been victorious as well, in the U23 category. Among the U20s the victory has been for Paul Verbnjak (AUT) and Samantha Bertolina (ITA), while for Jérémy Muriset (SUI) and Antonia Niedermaier (GER) in the youngest category (U18).

The race track, designed by the Race Director of the event Carlo Ferrari, has went through some changes due to the bad weather conditions of the last few hours, making the insiders to opt for an emergency course. The Senior Women’s and Men’s track included a two-ascent lap to be repeated twice for a total of about 1500 metres.

As for the Senior Men, the Swiss Rémi Bonnet in the first uphill has taken the command of the race, followed by the Italians Matteo Eydallin, Robert Antonioli and Davide Magnini. In the first short descent the positions did not change, since the hardest part of the track had yet to test the strength of the competitors. In the subsequent transition, the first to leave the dedicated area is Matteo Eydallin, followed by Rémi Bonnet and the teammates Robert Antonioli and Davide Magnini. In the third and long ascent the Italian athlete has tried to force the pace in order to take a major advantage from Rémi Bonnet and Robert Antonioli, who were approaching. The final positions have been decided in the last ascent, but the battle for the title of World Champion was not yet over. Matteo Eydallin has begun the last descent towards the finish line with a slight advantage, followed by Robert Antonioli, who was trying to do the impossible and, in fact, achieved the second position. Therefore, at the end Matteo Eydallin has been awarded as new World Champion in a time of 1:14’21”, whereas Robert Antonioli has got the silver medal. Rémi Bonnet, third on the finish line, but considered fourth due to a penalty, is followed by the Italian Michele Boscacci (5° place), while his teammate Davide Magnini has completed the podium in third position.

About Senior Women, the French Axelle Gachet-Mollaret has maintained the first position for the entire duration of the race, leaving the Swedish Tove Alexandersson and the Italian Alba De Silvestro to fight for the supporting positions. At the end the transalpine athlete has crossed the finish line first in a time of 1:26’36’’, becoming the new World Champion in the Individual discipline. Tove Alexandersson has arrived in second position with only 58 seconds of delay, while Alba De Silvestro in the third one. The latter’s teammates Giulia Murada and Ilaria Veronese have got the fourth and fifth place respectively.

To officially conclude the 2021 ISMF World Championships, during the afternoon there have been the prize-giving ceremony during which the Italian team has been awarded as World Champion nation.

After the intense week in Andorra, the last World Championships of the 2020/21 season will take place on Friday 12 March in Arêches-Beaufort, France. It will be an unprecedented Pierra Menta, valid as a single race of the World Championships Long Distance Team. On this occasion, the strongest male and female couple all over the world will be awarded.

Roberto Cavallo, ISMF General & Event Manager, commenting the event in Andorra, affirms: “We are very proud and satisfied of the result of the just concluded ISMF World Championships. It has been a great success, despite the pandemic in course and the bad weather conditions of the last day. On behalf of the entire ISMF, I would like to thank the Local Organising Committee who, since many years, organises international ski mountaineering competitions and the volunteers who helped in the setting up of the tracks”.