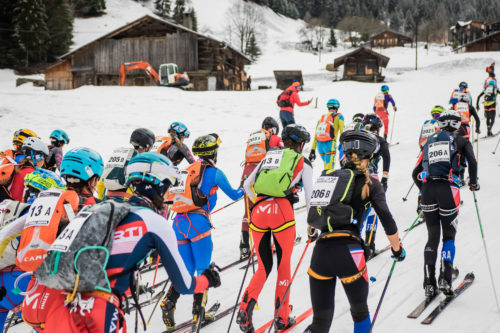 Lausanne/Mondovì, 12 March 2021 – The athletes of the Italian national team have won the last world title of the 2020/21 ISMF competitive season on the transalpine snows of Arêches-Beaufort, France. It has been a test bench of these new World Championships, as a result of the rediscovered collaboration between the ISMF and La Grande Course, and has represented a real marathon with 3400 metres of positive height difference divided into six climbs and as many descents. There were 38 teams (14 females and 24 males) at the starting blocks who competed in a hard and demanding track. Winter weather conditions with snow and low clouds have been the setting for this race day. The international skimo élite has literally made a spectacle on the mountains of the legendary Pierra Menta event. The race track presented steep climbs on slopes closed to the public alternated with parts on foot. As always, the descents have made the difference.

After the traditional initial phase, the teams started the first challenge in the programme, almost a thousand vertical metres of altitude difference for what has been considered only the taste of the day.

In the first real ascent the Italian athletes had already taken a few seconds of advantage, with Davide Magnini in front of the leading group to set the pace of the race, followed by the Swiss team composed of Rémi Bonnet and Werner Marti. The other blue couples were a little more detached. In the following ascents, with the passage to the Col de la Forclaz, in the shadow of the famous Grand Mont, the two athletes in command, Boscacci-Magnini, tried further to force the pace by taking a couple of minutes of advantage on the Swiss rival team. For the third position there was a great sports battle between the Austrians Jakob Herrmann and Christian Hoffmann and the Italians Nadir Maguet and William Boffelli, followed by Matteo Eydallin and Robert Antonioli (ITA). During the last short ascent the Boscacci/Magnini team managed to maintain the advantage, while behind them the Marti/Bonnet couple consolidated the second position. The third step of the podium has been decided in the last descent, the one that led to the finish line in Le Planey. At the end Michele Boscacci and Davide Magnini have been awarded as new Long Distance World Champions in a time of 3:28’25”, whereas the Swiss Werner Marti and Rémi Bonnet have crossed the finish line second with 5 minutes of delay. After a perfect last descent, the other Italians Nadir Maguet and William Boffelli have got the third position in a time of 3:33’32’’. The Austrian team has arrived fourth while the Antonioli-Eydallin couple fifth.

Among Women, the aforementioned first challenge had already made it clear who could get the gold medal. In fact, the Italian team made up of Alba De Silvestro and Giulia Murada and the French one composed of Axelle Gachet-Mollaret and Lorna Bonnel were climbing side by side and, at the end of the first ascent, they finished the planned transition practically together. Afterwards, the Italians overtook the French duo in the second ascent, but in their long overtaking they also took the compatriots Mara Martini and Ilaria Veronese with them. At the end Alba De Silvestro and Giulia Murada have won the world title closing in a time of 4:15’08”, while the Martini/Veronese team has got the second place with only 3’50” of delay. The podium has been completed by the French Axelle Gachet-Mollaret and Lorna Bonnel. The Swedish team composed of Tove Alexandersson and Fanny Borgström and the other Italian couple made up of Giulia Compagnoni and Katia Tomatis have reached the fourth and fifth position respectively.

Stefano Mottini, President of the Jury of the ISMF-LGC World Championships Long Distance Team, affirms: “The renewed collaboration between ISMF and La Grande Course is certainly positive for the international ski mountaineering community. Today’s competition has been held in full compliance with the anti-Covid measures and I think it has had a good response, even from the athletes. I hope it is just a starting point that will become a fixture for the seasons to come.”

Once archived the ISMF-LGC World Championships Long Distance Team, the 2020/21 ISMF season will have as its grand finale the World Cup scheduled for the end of March in Madonna di Campiglio, Italy. On this occasion the winners of the Overall World Cup and those of the three skimo specialties will be awarded.