Lausanne/Mondovì, 9 June 2022 – The ISMF calendar for the next season includes events of great importance in which the elite of international ski mountaineering athletes will compete in breath-taking sporting challenges from late November 2022 until around mid-April 2023. The calendar reflects the continuous growth that the ISMF has been implementing in recent period.

Following the excellent experience at the European Championships last year, the World Championships – the most important event of the next season – will be held in the same mountain ski resort, in Boí Taüll, Spain.

The ISMF World Cup circuit 2022/23 will consist of seven stages. The events will take place in some traditional countries, such as France, Italy, Switzerland and Andorra, but will also come back to Austria and Norway after a few years of stop, even if the finals in Norway have still to be confirmed at this time.

Furthermore, the Masters World Championships will be held in Slovakia, in the Chopok area, while the World Championships Long Distance Team will be performed in the ski resort of Pontedilegno-Tonale, Italy, as a part of the well-known Adamello Ski Raid event. This competition represents the continuation of the partnership with La Grande Course circuit.

In addition, for the first time in the history, ski mountaineering will be part of the European Youth Olympic Festival in January 2023, which will be targeted to 17- and 18-year-old athletes.

In the end, the ISMF would like to inform that the inclusion of the Youth European Cup circuit has been confirmed as of the 2022/23 season. These events will be open only to U16, U18 and U20 athletes from all over the world and will be held in European locations. More detailed information on this purpose will be released soon.

Regula Meier, the ISMF President, states: “On behalf of the entire International Federation, I can certainly affirm that we are deeply proud of the race calendar that has been outlined for the competitive season 2022/23. In addition to all our various collaborators and stakeholders, I would particularly like to thank the local organising committees for the tireless commitment and support that they always provide to the ISMF. I am convinced that the ISMF, in close cooperation with the LOCs, is looking forward to a season of top-class events.”

Even if the calendar 2022/23 is now official, the ISMF reserves the possibility to make changes due to unforeseen circumstances.

The calendar for next season is available on the ISMF website at any time. 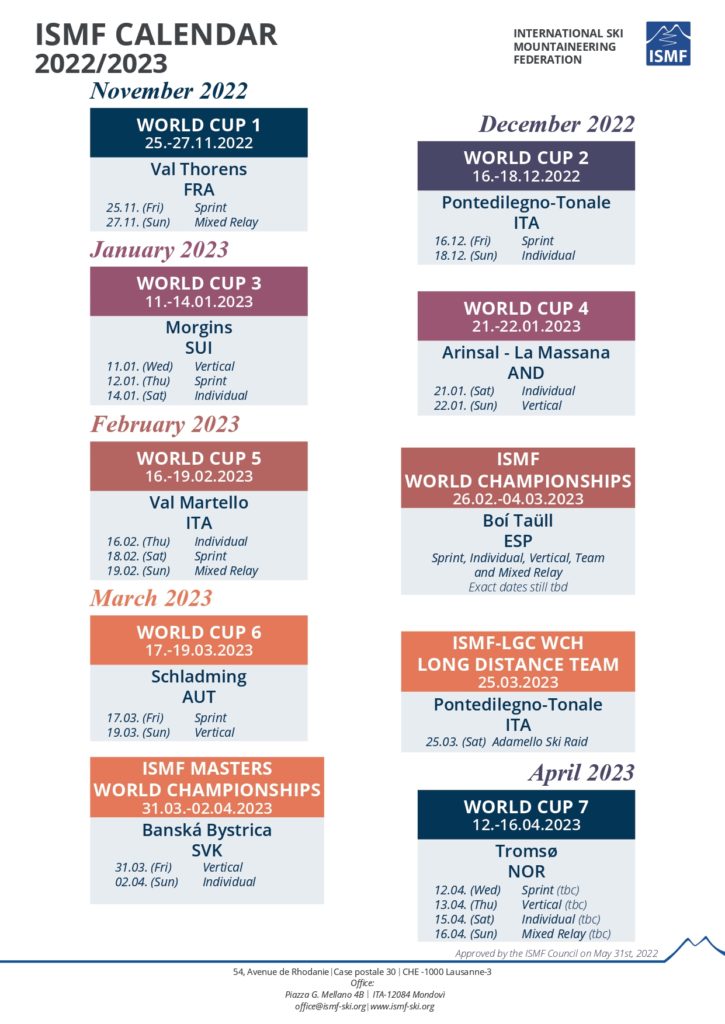