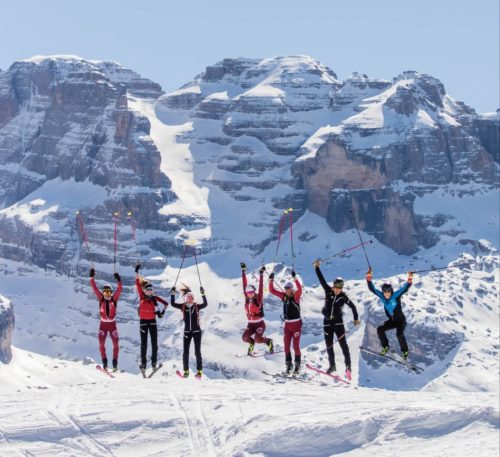 Lausanne/Mondovì, 24 March 2021 – Once archived the ISMF World Championships held at the beginning of the current month in Andorra, the great ski mountaineering is preparing to head for Madonna di Campiglio and the Dolomiti di Brenta, which will host the final stage of the ISMF World Cup for the fifth time. Therefore this event, scheduled from Thursday 25 to Sunday 28 March 2021, will officially conclude the 2020/2021 competitive season.

All the best international ski mountaineering athletes of the Senior, U23 and U20 categories will compete in the three scheduled races, trying to win and be awarded for both the Overall and the Specialties (Sprint, Vertical and Individual) rankings.

The Sprint race, which will take place in the Fortini area, will open the competitions’ schedule on Thursday 25 March 2021. At 10 in the morning there will be the qualifications for the Senior and U23 categories, with the final round from 12. The Vertical race, instead, will take place on Friday 26 March: the U20 Women will start at 15.30 always from the Fortini area, while for the older competitors the race track will develop on the Spinale Diretta slope, with the arrival at the summit of Monte Spinale for all categories. The starts will be divided into three blocks as follows: U20 Men at 15.50, Senior and U23 Women at 16.10, Senior and U23 Men at 16.30. On Saturday 27 March, the athletes will have the opportunity to rest for a day in view of the Individual race, planned on Sunday 28 March. This competition will give life to the 46th edition of the international Ski Alp Race Dolomiti di Brenta, one of the most exciting events of the history of ski mountaineering.

The most thrilling challenge for the Overall cup victory will be the one of the Senior category, with the Italian Robert Antonioli looking for the fourth crystal cup, the third in a row. The champion from Valtellina leads the ranking with 587 points, followed by the French Thibault Anselmet with 26 points of difference, while the Italian (coming from Trentino) Davide Magnini is in third position with 420 points. The discussion is still open also in the Senior Women ranking, where the Swedish Tove Alexandersson is the leader with 651 points ahead of the French Axelle Gachet-Mollaret (603) and the Swiss Marianne Fatton (563). Among U23s, there could be a double Italian domination, with Andrea Prandi and Giulia Murada in command of the respective rankings. The Italian team also leads the ranking among U20 Women, with the strong Samantha Bertolina, while the Austrian Paul Verbnjak is in first position among the Men of the same category.