The transalpine Champion and the strong Swiss athlete won the last Individual race of the 2021/22 season.

Lausanne, 6 April 2022 – Lisa Moreschini and Sebastien Guichardaz, both of Italy, won among U23s, while the Swiss Thibe Deseyn and Thomas Bussard dominated the U20 category. Despite a day with uncertain weather conditions, the French local organising committee, supported by the ISMF Technical Jury’s referees, managed to offer real ski mountaineering tracks. For the Senior men, it included 5 ascents, 4 descents and 2 parts on foot with a positive difference in altitude of 1660 m. The Senior women and the U20 men competed on a course with a vertical gain of 1270 m, while for the U20 women it was of 1090 m. For all of them, the start and finish lines were at the foot of the ski lifts, in front of many tourists who crowded into Flaine ski resort this week.

Among Senior women, the French Axelle Gachet-Mollaret confirmed once again to be the strongest, ahead of the Italian athletes Giulia Murada (2nd place) and Alba De Silvestro (3rd place). Moving to the Senior men, Rémi Bonnet (SUI) was able to finish first, followed by the French William Bon Mardion and the Italian Davide Magnini, finished in second and third position respectively.

The French athletes Axelle Gachet-Mollaret and Xavier Gachet were able to win the Individual Specialty Cup. For women, Emily Harrop of France and Alba De Silvestro of Italy completed the podium, while, among men, Michele Boscacci (ITA) and William Bon Mardion (FRA) achieved the second and third position.

The WÜRTH MODYF ISMF World Cup finals will continue tomorrow with the scheduled Vertical race and also in this case the Specialty Cup globes will be awarded. 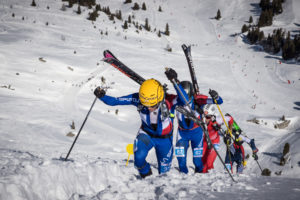