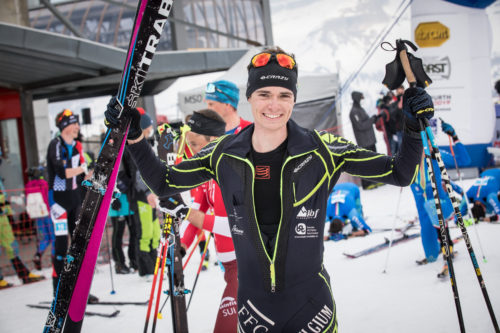 Madonna di Campiglio, 26 March 2021 – Italy celebrates only for the U23 category in the Vertical race held today in Madonna di Campiglio (penultimate competition of the final stage of the ISMF World Cup), thanks to Giulia Murada and Andrea Prandi, who have won the race and also the Specialty Cup. The most expected challenges, the Seniors’ ones, have seen the domination of the 23-year-old Maximilien Drion Du Chapois (BEL), in front of the contemporary from Trentino (ITA) Davide Magnini, and the French Axelle Gachet-Mollaret among Women. The German Antonia Niedermaier and the Austrian Paul Verbnjak have won in the U20 category.

However, the evaluation for the Italian team, trained by the coach Stefano Bendetti, is positive given that even in the second of the races held in Trentino the podiums are a total of 7, also considering the results of Alba De Silvestro (arrived third among Senior Women), Matteo Sostizzo and Samantha Bertolina (both second in the U20 category) and Giorgia Felicetti (second after her teammate Giulia Murada).

Belgium triumphs in the Vertical race of Madonna di Campiglio

It has been a day to be framed for the Belgian Maximilien Drion Du Chapois, maker of an irresistible attack action with multiple bursts of speed that allowed him to shake off the gritty Davide Magnini from Vermiglio (ITA). In particular the Belgian athlete has proved to be very experienced on the plateau before the last wall that led to the finish line on Monte Spinale (2100 m of altitude), being able to cross the finish line in a time of 23’56”, after 3500 m of development and 600 m of height difference. He has achieved the first step of the podium ahead of the Italian Davide Magnini (2° place with 10 seconds of delay), while the Swiss Werner Marti (3° place), the Italian from Alto-Adige Alex Oberbacher (4° place) and the other Swiss Martin Anthamatten (5° place) have arrived with 24, 33 and 35 seconds of delay respectively. The ranking of race proceeds with the French Thibault Anselmet (6° position and winner of the Vertical Specialty Cup), the Italian Michele Boscacci (7° position), the Austrian Christof Hochenwarter (8° position), and the Italians Robert Antonioli and Andrea Prandi, ninth and tenth. Federico Nicolini from Trentino (ITA), leader of the provisional specialty ranking before this race, has crossed the finish line only sixteenth, resulting unable to perform at his best on a track that he knows but incapable to manage today’s anxiety.

France, Switzerland, Italy: this has been the podium of the Senior Women’s competition. The French Axelle Gachet-Mollaret has got the top first in a time of 28’18”, followed by the Swiss Victoria Kreuzer with 24 seconds of delay, the Italian Alba De Silvestro, the Austrian Sarah Dreier and the other Swiss Marianne Fatton.

As for the U23 categories, Andrea Prandi (ITA) has stood out on Julien Bernaz (FRA) and Julien Ançay (SUI), while the Italians Giulia Murada and Giorgia Felicetti have been awarded as gold and silver medallists respectively, followed by the French Marie Pollet-Villard in third position.

Paul Verbnjak (AUT) is the winner in the U20 category, since he has been able to precede the Italian Matteo Sostizzo by 37 seconds and the Swiss Thomas Bussard by 39 seconds. Among Women, the only category that has faced a shorter course, the German Antonia Niedermaier has reached the first step of the podium, ahead of the Italian Samantha Bertolina (2° place), the American Grace Staberg (3° place), the Swiss Caroline Ulrich (4° place) and the other Italian Lisa Moreschini (5° place).

Tomorrow, Saturday 27 March 2021, the protagonists of the final stage of the ISMF World Cup in Madonna di Campiglio will enjoy a rest day. They will have the possibility to train at high altitude surrounded by the enchanting Dolomiti di Brenta, before facing the very last competition of the season. The individual race will be the grand finale and will take place on Sunday morning (start at 9.30). Afterwards, the Specialty and the Overall Cups will be awarded.