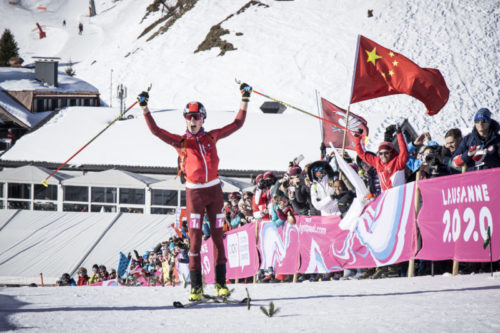 Lausanne/Mondovì, 20 July 2021 – The decision has unanimously made today during the 138th IOC session in Tokyo on the occasion of the Summer Olympics. After the meeting held in June, the IOC Executive Board has formally accepted the addition of the skimo proposed by the Organising Committee. The programme will include five medal events with a total of 48 athletes at the starting line, keeping the same format of the Lausanne 2020 Youth Olympic Games.

Thomas Kähr, ISMF President, asserts: “We are Olympic! We are writing an important page in the history of winter sports. After many years of commitment, efforts and passionate work we have finally reached the top step and realised the famous Olympic Dream. It has been a long and intense path, but now the satisfaction is unthinkable and the skimo community must be proud of this achievement.

I am sure that all my colleagues and the entire world of ski mountaineering are feeling an indescribable emotion in this moment and I can assure that the ISMF will do its utmost to present a magnificent sport at the Olympic Winter Games Milano Cortina 2026.”

The ISMF would like to deeply thank all those who have made it possible to achieve this considerable milestone, including all the staff, delegates and colleagues of the ISMF.

The international federation intends to show all of them the sincerest gratitude for the great and loyal teamwork they have done over the years, because the invaluable contribution of each of them has been fundamental.

Read more in the official media information of the International Olympic Committee.