Rémi Bonnet (SUI) and Axelle Gachet-Mollaret (FRA) win the Vertical race in Verbier, valid as second round of the 20/21 ISMF World Cup circuit 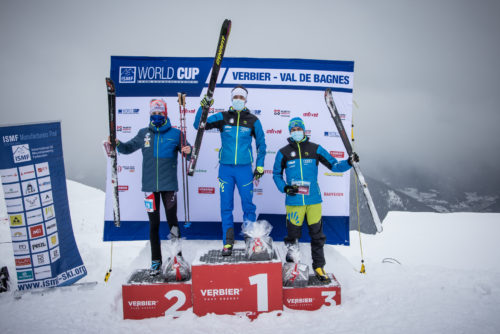 As for the U23 category, the Italians Andrea Prandi and Giulia Murada are the winners, while Paul Verbnjak (AUT) and Antonia Niedermaier (GER) excelled among U20 athletes present in the Canton of Valais

Lausanne/Mondovì, 29 January 2021 – The difficult weather conditions in the Swiss mountains with pouring rain in the start area, in the heart of Verbier, forced the organising committee to postpone the starting time of the today’s Vertical race. The reason was to take at most advantage of the brief rest from the rain that gave the athletes the possibility to compete with a less intense rainfall.

The Swiss Rémi Bonnet, upon his return to the World Cup, has won on the same track that gave him the title of World Champion in 2015 with a time of 26’53”, ahead his teammate Werner Marti and the French Thibault Anselmet.

Among Women, the French champion Axelle Gachet-Mollaret has competed on her own and achieved the victory with a final time of 32’18”, followed by the Swiss Maude Mathys and the Swedish Tove Alexandersson.

Regarding the youths, the success has been for Andrea Prandi (ITA) and Giulia Murada (ITA) for the U23 category, while Paul Verbnjak (AUT) and Antonia Niedermaier (GER) have been the medallists for the youngest category.

The competition was surely of a high level, but with an uncertain forecast. In fact the rain shuffled the cards on the table and, from about halfway through, gave way to a heavy snowfall go ahead causing some possible consequent difficulties for the competing athletes. The race track followed in part the 2015 ISMF World Championship course with the start near the valley station of the ski resort and the arrival in Les Ruinettes with a positive altitude difference of 655 metres. Fully respecting the anti-Covid protocols and directives, the start has been given with special blocks guaranteeing the necessary distancing among the racers.

Once archived the first competition, on Sunday, the ski mountaineering athletes will move to Bruson, a few kilometres from Verbier, for the Individual race. On that occasion they will have to face a track loop with a positive height difference of about 1500 metres divided in four ascents and as many descents.

Rémi Bonnet (SUI), the Senior Men winner of today, evaluate his race as follows: “I was really concentrated and very excited to compete on this challenging track, as I knew that the effort to face on would have been great. Furthermore, I was a bit worried for the weather conditions. However, I did my best and I spent all possible energies to achieve my goal of today. Obviously, I am satisfied with my performance and I hope to be able to repeat it in the Individual race scheduled for Sunday”.