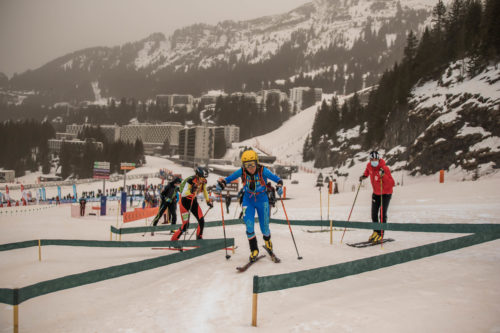 As for U23 category, Giulia Murada (ITA) and Arno Lietha (SUI) have excelled,

In the qualification rounds all the strongest athletes did not want to run risks; today’s race in Flaine has assigned precious, very precious points for the purposes of the Overall World Cup ranking. Fast passages, agitated phases, the inconvenience always around the corner have contributed to make the competition spectacular, to say the least.

In the Senior Men’s final, Daniel Zugg (AUT), Oriol Cardona Coll (ESP), Thibault Anselmet (FRA), Stefan Knopf (GER), Iwan Arnold (SUI) and Arno Lietha (SUI) were at the starting line. Thibault Anselmet has maintained the first position throughout the first section of the race up to the part on foot. In that point Oriol Cardona Coll has overtaken him getting the command of the group that he has held until the end of the competition. The Spanish athlete has crossed the finish line with a time of 3’55’’, followed by Daniel Zugg (2° place) with a total time of 4’, while Thibault Anselmet has completed the podium in third place.

Among U23s, the victory has been for Giulia Murada (ITA) and Arno Lietha (SUI) while for Samantha Bertolina (ITA) and Robin Bussard (SUI) in the U20 category.

THE SPRINT: The third stage of the ISMF World Cup held in Flaine’s ski resort, located in the French Haute-Savoie, has just ended with the most spectacular and explosive ski mountaineering race typology. This is the one that condenses in a restricted circuit what are the peculiarities of this sport: mass start, changeovers among the diamonds, parts on foot and acrobatic descents. 70 metres of positive altitude difference may seem few, especially for athletes used to deal with even 2000 or 3000 metres per day, but to face them at full speed for a minimum of one and a maximum of four times it is another matter. Yes, because considering qualifications and final rounds, to win a Sprint race an athlete must best dose explosive phases with very short recovery ones, managing lactic acid peaks.

NEXT STAGE VAL MARTELLO: In view of the ISMF World Championships to be held in Andorra, scheduled for the beginning of March 2021, the World Cup circuit will stopover in Val Martello, Italy. On that occasion, from Saturday 20 to Sunday 21 February 2021, the international athletes will be involved in an Individual race and a Sprint race, which will represent two decisive competitions to lift the reservations in view of the World Championships.

“The third ISMF World Cup has just ended and the Flaine ski resort has proved to be an excellent location to host a similar event. The athletes competed with vigour and tenacity, but always in a very correct and respectful way towards the opponents. I firmly believe that this is the right spirit to be able to take part in the ISMF events. It is undoubtedly a great goal to be always proposed in sport.” – The observation of the ISMF Vice-President Sport & Events Pierre Dupont after the World Cup in Flaine. 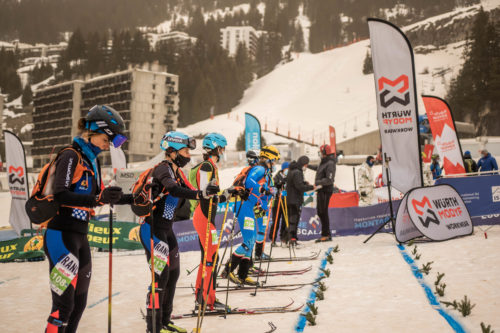