On the Swiss snows of Disentis, Robert Antonioli and Axelle Gachet Mollaret won the Individual race 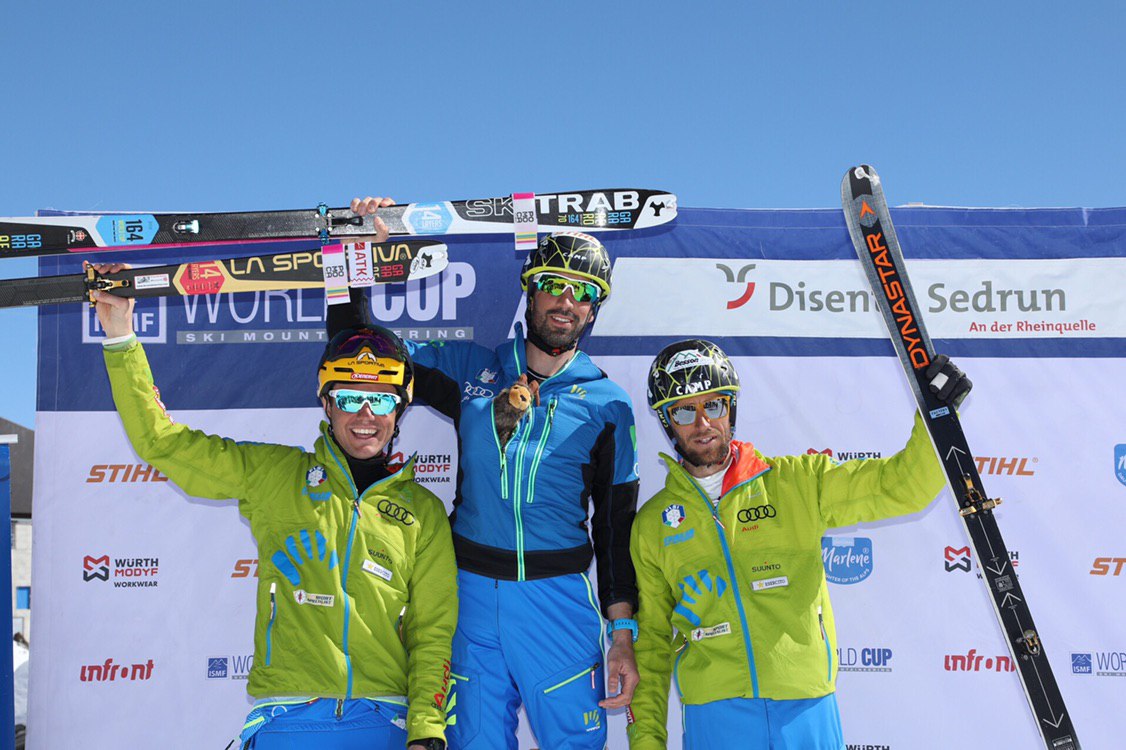 Among Juniors the victory was for Giovanni Rossi and Ekaterina Osichkina

Lausanne, 23rd March 2019 – Only seven days after the World Championships races of Villars-sur-Ollon, the Ski Mountaineering World Cup brought the best skimo élite again on the Swiss snows. The beautiful Grison ski area of ​​Disentis is the theatre of the penultimate stage in 2019.

Sun, temperatures without doubt spring-like and a lot of snow were the setting for a truly technical, aerial and spectacular Individual race. The first part of the competition, reserved for the Senior Men, has been characterised by a positive difference in height of 1640 metres with 5 ascents and two parts on foot; the maximum altitude reached was above 3000 metres of elevation. Fourteen kilometres of true ski mountaineering were established for a super challenge Germany-Italy between the Cup leader Anton Palzer (GER) and the World Champion of specialty Robert Antonioli (ITA). The Swiss and the French Xavier Gachet are likely outsiders.

From the really beginning of the competition the Italian Michele Boscacci started to lead the group with a frenetic rhythm. In the first two ascents the pursuers (the French Xavier Gachet and the Italians Robert Antonioli, Matteo Eydallin and Davide Magnini) kept the shot on Boscacci, alternating in the positions of reinforcement.

In the third uphill, the one that also included a steep part on foot inside a canal, Michele Boscacci has showed the first signs of tiredness and, perhaps also because of the great heat, began to suffer from cramps. The small group behind him closed the gap and, along the last descent, everyone was side by side. In the last transition zone, the arrival was expected with sealskins and the Italians Michele Boscacci and Robert Antonioli entered almost together, but at the end Robert Antonioli was the first to start and crossed the finish line with hands raised with the time of 1h26’34”. Michele Boscacci confirmed in second position with only 6” of difference, while Matteo Eydallin in third place, 12” behind the winner.

Among Women, there was yet another solo of the new World Champion Axelle Gachet Mollaret (FRA) who, as expected, dictated the times to the respective opponents on thirteen kilometres with 1520 metres of positive difference in altitude. The athlete won with a time of 1h37’04”; behind her there were her compatriot Lorna Bonnel (2nd place) and the Italian Alba De Silvestro (3rd place). Concerning the youth categories, Giovanni Rossi (ITA) and Ekaterina Osichkina (RUS) got the first step of the podium among Juniors and for the Espoirs the victory was for the Italians Davide Magnini and Giulia Murada.

The Individual race has just ended, but tomorrow morning the space will be for the Vertical with the hosts Marti Werner and Victoria Kreuzer super favourites.