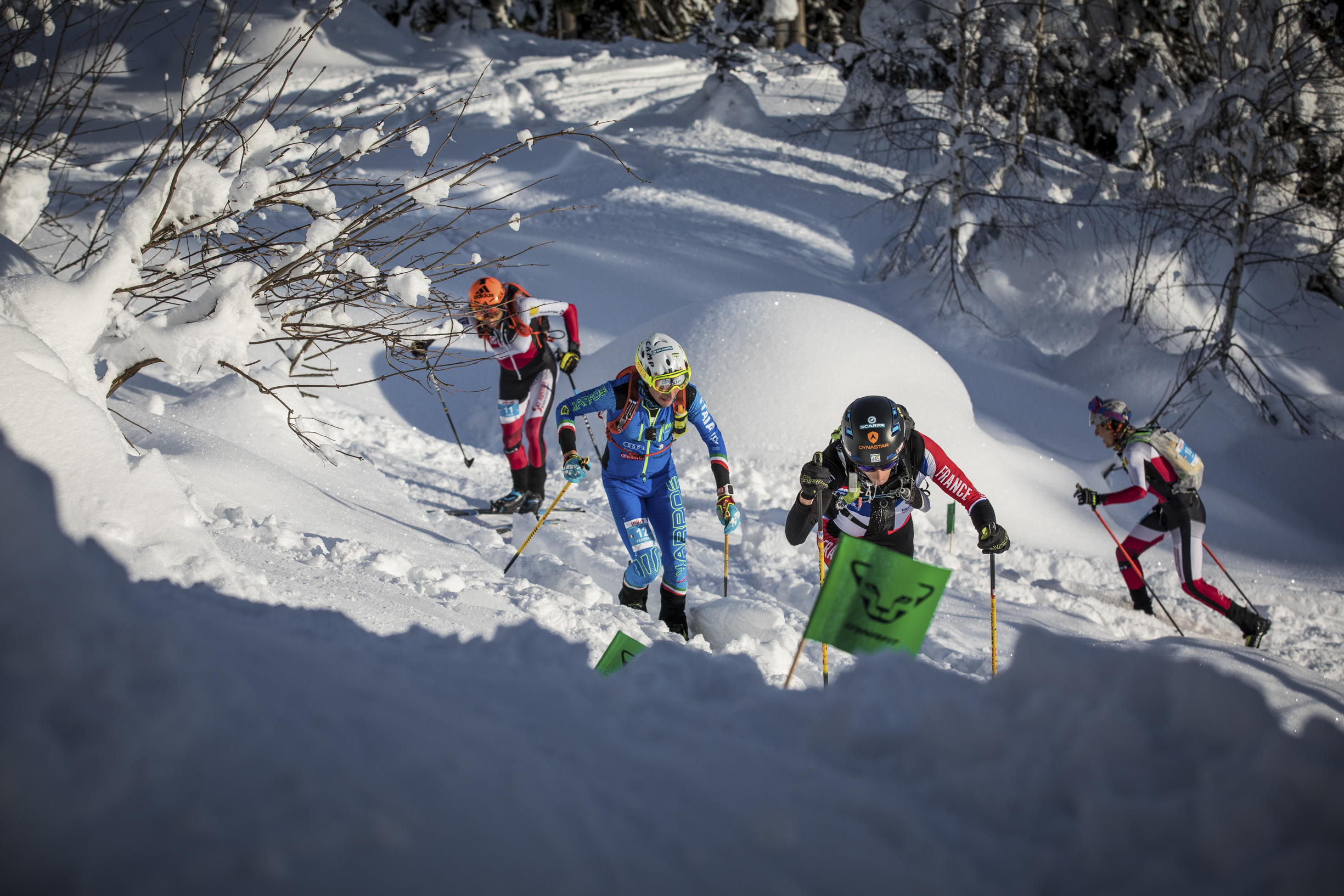 Lausanne, 20th January 2019 – A lot of snow, fast descents, a spectacular circuit and the Austrian mountains to frame a sunny day were the essential ingredients for the first Individual competition of ISMF World Cup. In the beautiful Austrian location of Bischofshofen the copious snowfalls of the beginning of the season have forced the local organisers and the referees to adopt the so-called “plan B”. It consisted in a circuit itinerary of highly emotional impact for the large audience rushed to the Paul Ausserleitner hill faced twice by the skimo champions.

Ready, go and the race immediately became exciting with the top men very determined to rewrite new hierarchies. Continuous overtaking and changes in direction have characterised the leading group composed by Michele Boscacci (ITA), Marti Werner (SUI), Robert Antonioli (ITA), Federico Nicolini (ITA) and Nadir Maguet (ITA). At the end of the first lap a river of people greeted the passage of the athletes under the hill where they faced the part on foot.

Michele Boscacci has struggled quite a lot in the first part of the race, in order to contain a wild Marti Werner. The turning point occurred in the first descent. Michele Boscacci stopped the delay and got the head of the race, where he remained for the rest of the competition. Behind him, Marti Werner tried to resist the comeback of Robert Antonioli, but at the end of the penultimate descent the Italian athlete passed the Swiss rival.

Michele Boscacci closed in the shadow of the hill with a time of 1h26’14”, while his teammate Robert Antonioli reached the finish with a delay of 24 seconds. Werner Marti took the 3rd step of the podium  with a time of 1h26’45”. In the 4th and 5th positions were respectively Federico Nicolini and Nadir Maguet.

Among the Women, the French Axelle Mollaret immediately took control of the race and with relative calm managed to maintain the 1st position by crossing the finish line with the time 1h14’30”. The Spanish Claudia Galicia Cotrina and the Swiss Marianne Fatton arrived took respectively the 2nd and the 3rd position on the Senior Women’s podium. The 4th step was for Alba De Silvestro (ITA). In the Espoir category, Samuel Equy (FRA) and Giulia Murada (ITA) won.

Testing themselves in the sacred temple of the ski jump of Bischofshofen, the athletes of the Senior category competed with a difference in height of 1600m divided in 2 laps and 6 ascents. In addition, there were 12 changes of equipment and two parts on foot on the hill that Friday night had hosted the Sprint race. The Senior Women’s and Juniors Men’s route had a difference in height of 1100m with 6 ascents, while for the Juniors Women of 700m.

After the first stage in Austria, the World Cup circuit will return to make an exhibition next weekend with the usual double appointment of Font Blanca, in Andorra. In this occasion a Vertical race and an Individual race are scheduled in a location once again with a strong appeal.