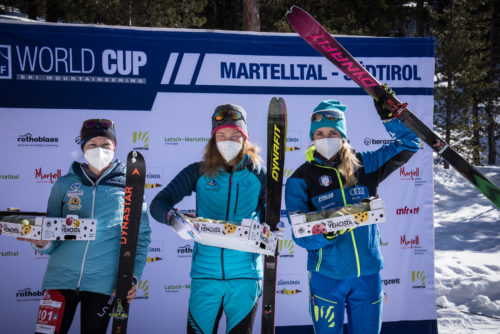 The Italians Andrea Prandi and Giulia Murada got the first position among U23s, whereas Samantha Bertolina (ITA) and Paul Verbnjak (AUT) in the U20 category

Lausanne/Mondovì, 21 February 2021 – A day with a clear sky and springtime temperatures has been the setting for the last competition scheduled for the ISMF World Cup in Val Martello, Italy.

The Individual race has been held in the heart of the Stelvio National Park, in front of the Marmotta Mount (from which the entire event took the name), the Gran Zebrù Peak and the Ortles-Cevedale mountains.

The Senior Men had to face a 18,5-kilometre track with an altitude difference of 1.900 m. It dealt with a technical course, with two parts on foot, consisting of three ascents and as many descents.

A small group composed of the Swiss Rémi Bonnet and the Italians Matteo Eydallin, Robert Antonioli, Davide Magnini and Michele Boscacci took the lead immediately after the start. At the end of the first uphill section, Michele Boscacci was the first to get out of the transition area, followed by Rémi Bonnet, while all other opponents were immediately behind them. The second roughness of the day put the competitors to the test. The Swiss tried to take the lead, while Matteo Eydallin was close to him. The fates of the race has been decided between the final ascent and the descent that led to the finish line. Matteo Eydallin had no doubts, skiing with fast lines to cross the finish line with a time of 1:43’27’’. Therefore, Rémi Bonnet and Robert Antonioli got respectively the second and third position of the podium.

Among the Men belonging to the U23 category, the victory has been for the Italians Andrea Prandi (1° place), Sebastien Guichardaz (2° place) and the Swiss Julien Ançay (3° place).

The Senior Women Tove Alexandersson (SWE) and Axelle Gachet-Mollaret (FRA) had to do with a competitive battle. Starting from the first ascent the French athlete has begun to set the pace, but in the first part on foot the Swedish opponent already took the command of the race. At the end Tove Alexandersson crossed the finish line first with a time of 1:40’59’’, while the French competitor arrived second accumulating a delay of 3’45”. The podium of the Senior Women has been completed by the Italian Alba De Silvestro in third place.

Giulia Murada (ITA), Giorgia Felicetti (ITA) and Marie Pollet-Villard (FRA) reached the first three positions among U23 Women, while the success was for Samantha Bertolina (ITA) and Paul Verbnjak (AUT) in the U20 category.

Now there are only a few days to rest before to move towards the snows of La Massana (Andorra) for the ISMF World Championships scheduled from 1 to 6 March 2021.

Georg Altstätter, LOC’s President of the Marmotta Trophy event, analyses the race weekend just concluded: “I can be very satisfied with the development of the two competitions scheduled here in Val Martello. The excellent collaboration between LOC and ISMF has shown that once again it is possible to create a fruitful and productive synergy as it had already happened in past editions.

In addition and to give an added value, in my opinion the location of Val Martello and in particular the area of the Biathlon Centre are appropriate and perfectly suitable to set up ski mountaineering competitions”. 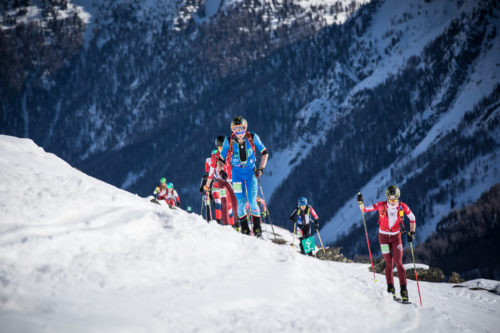