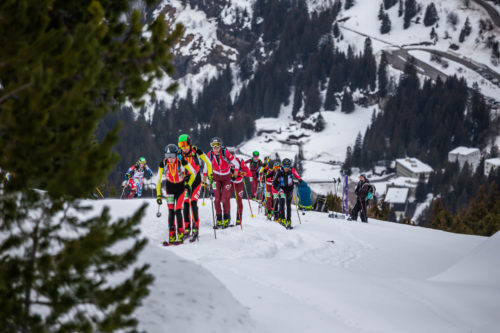 The Italians Giulia Murada and Andrea Prandi have been the strongest of the day in the U23 category, while among U20 Samantha Bertolina (ITA) and Paul Verbnjak (AUT) proved to deserve the first position of the podium

Lausanne/Mondovì, 5 February 2021 – The ISMF World Cup season gets into the thick of things with the two transalpine days in Flaine, Arâches-la-Frasse. The ski mountaineering athletes leader of the international ranking are trying to collect more and more precious points, while those who are further behind in the ranking know that this is the right opportunity to close the gap.

THE RACE: The particularly insidious descents had to make the difference and so it was, in fact the Italian Matteo Eydallin has conquered the first position right between the last descent and the last metres to be faced with the skis before crossing the finish line.

For the entire duration of the race the top positions were never well defined. At each transition the leading racers alternated to set the pace, first Davide Magnini (ITA), followed by the teammate Matteo Eydallin, then the French Thibault Anselmet. At the last transition, Davide Magnini had a few seconds of advantage, but immediately after him Matteo Eydallin put the turbo and crossed the finish line first with a time of 1:32’24”. Davide Magnini has reached the second position with only one second of disadvantage. Thibault Anselmet has arrived third with a time of 1:32’33’’.

Among Senior Women, Axelle Gachet-Mollaret (FRA) has controlled her opponents from the very beginning of the race, leaving the chasers Tove Alexandersson (SWE) and Marianne Fatton (SUI) the fight for the second place. The Sweden athlete is almost uncatchable, initially followed by Ilaria Veronese (ITA). Afterwards the Swiss Marianne Fatton and the Italian Alba De Silvestro have returned to compete to reach the top positions. At the end Axelle Gachet-Mollaret has crossed the finish line in 1:38’35” (1° place), Tove Alexandersson with a time of 1:39’22” (2° place) and Marianne Fatton with a time of 1:44’04’’ (3° place).

In the U23 category, Giulia Murada and Andrea Prandi, both from Italy, have been the winners of today’s Individual race, while Samantha Bertolina (ITA) and Paul Verbnjak (AUT) have dominated among U20s.

“Today the race track was icy and so I struggled a lot to get to the finish. This was an added value that allows me to be proud of the goal achieved today. I add a new victory to my palmarès and I have surely to be satisfied with that.” – Giulia Murada (ITA), U23 Women winner, comments in this way the Individual race in Flaine.

THE TRACK: For this occasion, the local organising committee, supported by the ISMF technical staff, has set up a rather difficult circuit in the ascents and very fast in the descents. Moreover, the track has become even more treacherous by the wind which, during the night, has lowered the temperatures and made the snow particularly hard. The Senior Men had an altitude difference of about 1800 metres divided in 4 ascents and as many descents. The Senior Women and U23 Men, instead, had to face an height difference of 1600 metres, while the U20 Women of about 1100 metres.

NOW THE SPOTLIGHTS ARE ON THE SPRINT RACE: The ski mountaineering athletes specialist of the Sprint race will compete in the morning of Saturday 6 February 2021. There will be 135 racers representing 14 different national federations at the starting blocks. 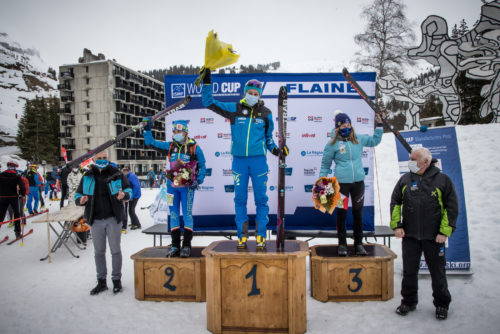