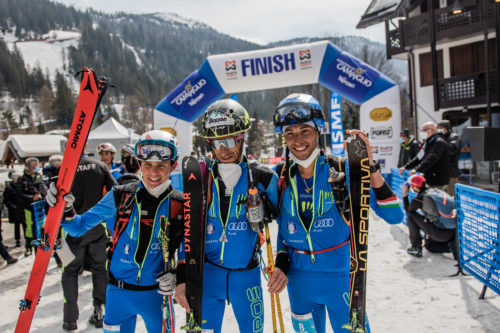 Madonna di Campiglio, 28 March 2021 – The satisfaction for Robert Antonioli (ITA) today has been double, because it has come to the very last breath. The Italian athlete has crossed the finish line only sixth in the Individual race of Madonna di Campiglio, the last competition scheduled for the three-day event of the ISMF World Cup final stage. However, he has won his fourth Overall Cup, the third in a row. Therefore, 28 March is a date to be circled in red for the thirty-year-old from Valfurva, not only because he has been awarded as one of the best ski mountaineering athletes in the history, but also because it coincides with the birthday of his mother Michela, to whom the leader of the Army Sports Centre has dedicated its fourth crystal cup. The French Axelle Gachet-Mollaret has been crowned among Women as well.

It has been a day to be framed for Italy, considering that, in a time of 1h23’36”, the Piedmontese Matteo Eydallin has triumphed at the end of the planned 13,5 km with an height difference of 1670 m including three ascents and as many descents, traced on the slopes of Monte Spinale. He has preceded the teammate Davide Magnini from Trentino by 52 seconds, while the challenge for the third step of the podium has been resolved in the sprint part with the racer Nadir Maguet from Aosta Valley able to stand up to the Michele Boscacci from Valtellina. Consequently, there has been an all-Italian four-person group leading in the Individual race, as it was expected to be.

The French William Bon Mardion, who is at home in Madonna di Campiglio, due to his four past victories in the Ski Alp Race Dolomiti di Brenta event, has been the only one to break the Italian hegemony reaching the fifth position at 3’39” from the winner. Robert Antonioli (ITA) has arrived sixth, as previously mentioned, being able to manage his major rival in the Overall ranking, Thibault Anselmet (FRA). Before today’s last competition the two athletes were separated by only two points, but the Italian racer spared no effort, while the transalpine one has collapsed achieving only the twentieth place. The competition of the Senior Men has been a sports battle between the teammates Matteo Eydallin and Davide Magnini, who have fought for most of the course, but the second one lost time in the two transitions on Monte Spinale and downstream, losing about thirty seconds, which were then irrecoverable. Therefore the expert skimo performer Matteo Eydallin has crossed the finish first and alone, also winning the Individual Specialty Cup, right ahead of Davide Magnini.

Competing on the same path, another member of the Italian national team, Andrea Prandi, has got the gold medal in the U23 category, followed by the German David Sambale (2° place) and the teammate from Premana Mirko Sanelli (3° place).

As for the Senior Women, with a development of 12 km and an altitude difference of 1458 m, the race has been the prerogative of the French skilled Axelle Gachet-Mollaret, who has taken the win in a time of 1h33’23”, ahead of the Italian Alba De Silvestro by just 24 seconds, maker of an high level performance. The third to complete the podium has been the Swedish Tove Alexandersson, while the Italians Mara Martini and Giulia Murada have come fourth and fifth respectively. The latter, however, has won among U23s Women, before the French Marie Pollet-Villard (2° position) and the teammate Giorgia Felicetti (3° position).

In the end, the success in the U20 category (with the same track of the Senior Women) has been for the Austrian Paul Verbnjak, followed by the Spanish Albert Pérez Anglès and on the other Austrian Andreas Mayer, with Alessandro Rossi (ITA) in fourth place. The U20 Women, instead, had a track of 7,8 km and an altitude difference of 900 m. Also in this case there has been a sports battle between two Italian girls, Samantha Bertolina and Lisa Moreschini. The latter has been in the lead for more than half of the race, but losing too much time during the transitions she has crossed finish line 14 seconds behind her rival friend, who won today’s race and also the Individual Specialty Cup. The American Grace Staberg is third.

The Swiss ski mountaineering team has been disqualified from competing in the final Individual Race and the related ceremonies on Sunday, 28 March because of non-compliance with the Covid protocol. The entire team went back to Switzerland on early Sunday morning.

Roberto Cavallo, ISMF General & Event Manager, affirms: “The 2020/21 ISMF season officially concludes with today’s race. We managed to carry out all the events scheduled in the calendar, despite the challenging situation due to the Covid-19 pandemic. We can only be proud of this goal! It has been a long season, but full of many successes that allow us to always improve, managing from season to season to refine and smooth out more and more details. For this reason I would like to thank all the people who have collaborated in the organisation and setting up of the races, thanks to which it would not have been possible to make it.

What can I say … see you next season!”