Samantha Bertolina of Italy and Matteo Favre of Switzerland are the winners of the U23 category, while Silvia Berra (ITA) and Robin Bussard (SUI) dominated among U20s.

Lausanne, 20 March 2022 – The Biathlon Centre “Grogg” in Val Martello, Italy, was transformed into the location of an international ski mountaineering competition, the Sprint race, which took place today. There were fast parts on foot, spectacular curves and an impressive scenery in front of an audience that supported the competitors from start to finish.

During the qualifications all best competing athletes did not want to take any risks, in order to conserve the energy for the rest of today’s race, which was the penultimate Sprint of the 2021/22 WÜRTH MODYF ISMF World Cup.

In the men’s final round on the starting line there were Matteo Favre (SUI), Oriol Cardona Coll (ESP), Nicoló Ernesto Canclini (ITA), Iwan Arnold (SUI), Arno Lietha (SUI) and Iñigo Martinez de Albornoz (ESP). The Spaniard Oriol Cardona Coll held the first position throughout the race and, indeed, he took the first position with a final a time of 3’08”, followed by the two Swiss athletes Matteo Favre (2nd place) with 5” of delay and Arno Lietha (3rd place) in 3’17”.

Among women, Emily Harrop of France took the win with a time of 3’13”, ahead of Marianna Jagercikova of Slovakia and Léna Bonnel of France, finished in second and third position respectively.

Samantha Bertolina (ITA) and Matteo Favre (SUI) took the top step of the podium in the U23 category, while Silvia Berra of Italy and Robin Bussard of Switzerland excelled among U20s athletes.

The WÜRTH MODYF ISMF World Cup will return in the first week of April for the final stage of the 2021/22 season. It will take place in Flaine, France, with three races: Individual, Vertical and Sprint.

After concluding this leg, the local organising committee of Marmotta Trophy is already considering a possible new application for the 2022/23 season. 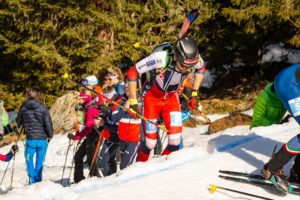