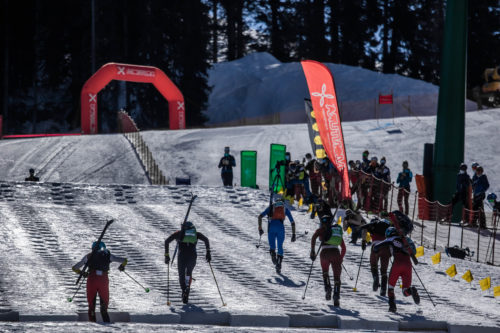 The Specialty cups for the Sprint discipline have been awarded today

Madonna di Campiglio, 25 March 2021 – The location of Madonna di Campiglio has always brought good luck to the Swiss national team. In fact, the Swiss team can count four victories out of six categories in today’s Sprint race that has opened the three-day final stage of the ISMF World Cup in Trentino, Italy. Furthermore, they have conquered five Specialty Cups in the Sprint discipline.

The star attraction of the day, as indeed in all other legs of the circuit, has been the talented Arno Lietha (SUI), who has easily won the qualification, semi-final and final rounds, as well as to excel among U23, being only 22 years old. Among Senior Women, on the other hand, the Slovakian Marianna Jagercikova has triumphed in the final, winning the same race in Madonna di Campiglio of two years ago.

Italy’s only victory has been in the U23 category with the by now famous Giulia Murada, coming from Albosaggia, in the Valtellina area. However, the Italian national team can smile since the Lombard from Valdisotto Nicolò Ernesto Canclini has achieved the second position among Senior Men thanks to a very convincing second part of the final. Furthermore, today another place of honour in the Italian team has gone to the Friulian of Claut Mara Martini, who with a downhill forcing has sensationally recovered and has been very close to the final victory.

Regarding the Senior Men, therefore, the Swiss Arno Lietha has been the best competing athlete, while Nicolò Ernesto Canclini (ITA) with his second place of today can confirm an interesting profile for this specialty. The French Thibault Anselmet has arrived third, gaining some important points in the Overall ranking towards the current leader Robert Antonioli (ITA), who on this occasion has reached the fifth place behind the Belgian Maximilien Drion Du Chapois (4° place). The other qualified Italian athlete, Nadir Maguet, is sixth.

Among Senior Women, Marianna Jagercikova (SVK) has proved to be excited when she competes on the Dolomiti di Brenta and has been able to dominate at the finish line in the Fortini area, managing the explosive Mara Martini (ITA). The Swiss Marianne Fatton has concluded her race obtaining the third step of the podium.

As for the U23s, whose ranking is taken from the Senior’ one, the Italian Giulia Murada has got to the top first, ahead of the two French teammates Manon Anselmet (2° position) and Marie Pollet-Villard (3° position), with the other Italian racer Giorgia Felicetti in fourth place. Among the Men of the same category, as previously mentioned, the Swiss Arno Lietha has been the winner followed by Giovanni Rossi (ITA) and Pau Coll Turrà (ESP), arrived second and third respectively.

Switzerland wins in the U20 category

The first category to open the three days of competitions in Madonna di Campiglio has been the U20, whose competition has been characterised by a double victory of Switzerland: Matteo Favre among Men and Caroline Ulrich among Women.

In the last act the Swiss athlete has immediately tried to attack Rocco Baldini from Valtellina (ITA), who at the beginning was in the lead, achieving the feat in the part with the snow steps and maintaining a decent advantage until the finish line. As a consequence, the Italian competitor has got the silver medal, while the bronze one has been for the other Swiss Tobias Donnet. The French Noé Rogier has reached the fourth place.

Among U20 Women, Caroline Ulrich (SUI) has triumphed, being able to manage the final round better than her opponents, although Samantha Bertolina (ITA) tried to overtake the Swiss rival in the final downhill part, but without success. More detached, her teammate Lisa Moreschini has crossed the finish line third, after having contained the recovery of the Spanish Maria Costa Díez.

Tomorrow (Friday 26 March 2021) it will be the turn of the second competition scheduled for the final stage of the 2020/21 ISMF World Cup in Madonna di Campiglio: the Vertical race. It will take place along the Monte Spinale, beginning with the U20 Women (start at 15.30) and finishing with the Senior and U23 Men categories (start at 16.30).

Oriol Montero Garcia, President of the Jury of the ISMF event in Madonna di Campiglio, asserts: “After the cancellation of last year’s races due to the pandemic, I am very pleased that the ISMF working group has managed to organise the final leg of the current season here again.

Regarding the Sprint race which ended a few hours ago, I can only be satisfied with its development. Every aspect has been tackled with competence and professionalism and, a detail not to be forgotten, the good weather also played its part, providing a perfect framework for today’s race”.